Well I used to be one of those persons that has a thousand WIP’s on the go at one time.  (well maybe not that many, but if you are one of these people, you will know what I mean).  Over the last 12 months I decided to do one project at a time and then I began my love affair with knitting the humble sock.  Pretty funny, considering I live in a tropical part of the world.  Since joining my first sock club from I have never looked back.  The thrill of waiting for the next skein of wool to come in the post was the most amazing feeling and this is when I knew I was hooked.

So just wanted to talk about what is on my needles right at this point and time.

So after my partner Dean has seen me over the last 12 months knitting away on sock after sock and none of them for him, decided to give knitting a male sock a go and knit him a soft squishy warm pair for him. 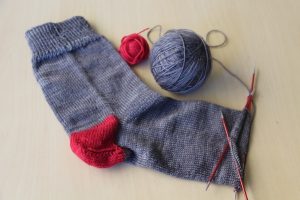 This is the progress so far.  Wanted to do the red (Dean choose this colour) as the heel and the toe, but that one mini skein has to do two socks, so not sure there will be enough, so just going to do the heel this time round.  Wool is from an Indie Dyer called Monthy and the Squid.  Found her on Etsy and the service to get the wool all the way from Glasgow in Scotland to me here in Brisbane, Australia was pretty quick.  Got a few skeins from her, but will save them for another story…..

So the sock above has  been put on hold as a few months ago I got asked by a friend to knit her a beanie and a pair of socks.  I did this and photo of the finished items below. 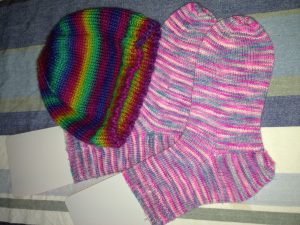 After she received them she emailed me and and politely asked me if I could please knit another beanie.  Now she knows that I am going travelling in 3 months time, so she was asking me very nicely, I can tell you.  When I asked why, she said that she opened the parcel up at her work and one of her workmates fell in love with the beanie and kinda of stole it.  So how I could refuse to no knit her another beanie.  This time the brief was hot pink.

So progress so far of this is on the needles as well.  So not doing too bad only having two WIP’s happening at the moment. 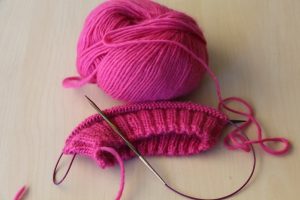